Science communication is growing steadily as a field of research, but institutional collaboration and diversity in the field are still lacking. In particular, Asia, Africa and South America are considerably under-represented in terms of authorship in this field. These are some of the main findings from a recent study into the global status of science communication research, conducted by Dr Lars Guenther (as lead author) and myself (Marina Joubert) at Stellenbosch University.

For this study, we downloaded and analysed 1 803 peer-reviewed research articles which have been published between 1979 and 2016 in the three main journals in the field (i.e. Science Communication, Public Understanding of Science and JCOM). We assessed the volume of research outputs, patterns in authorship, the geographical spread and the gender of the authors.

The combined output of the three journals increased significantly since 1991 and again since 1998, and has increased sharply once more since 2004. This increase in publications in all three journals suggests that science communication is expanding and maturing as a field of scholarly activity.

Looking at articles with more than one author (n = 955), only 16% had authors based in more than one country, suggesting a low level of cross-country collaboration. However, for multi-author papers the number of authors representing institutions in different countries increased significantly over time, confirming a trend towards internationalisation. We also demonstrated a trend in favour of institutional collaboration, as shown by the increase in multi-authored papers over time. 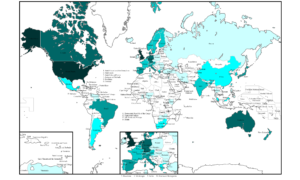 In terms of authors’ countries, authors from the USA dominated, followed by the UK, with fewer authors in Canada, the Netherlands, Australia, and Germany. Japan, in the 9th place, topped the list in terms of Asian countries where authors were based, while Brazil (ranked 10th performed best on the list of developing countries. South Africa was the global number 29, but fared best amongst African countries.

We documented a strong growth in female authorship that is changing the historical dominance of male researchers in this field. Interestingly, some countries displayed a better gender balance in authorship than others, and female authors contributed to multi-authored papers more often than their male counterparts.

We noted that the vast majority of all authors (82.3%) published only once in the three main journals under review. Another discouraging observation was that, despite a visible shift towards institutional collaboration and internationalisation, there is still clearly a big need to attract more research contributions from the southern hemisphere in general, but particularly we need to boost science communication research in Africa, Asia and the Middle East.

Noting the general lack of contributions from the developing world, several journals have, in the past, called for articles from developing country authors. We suggest, however, that it may be more effective to consider ways to encourage and incentivise collaborative research that would include researchers in developing countries from the outset of multi-country research projects.